When people begin searching through the various psychologists in Calgary to find someone able to address their struggles with hypersexuality or sexual addiction, they usually have only one thing in mind:

Make these out of control sexual behaviours stop!!!

For almost twenty years, I’ve been arguing that models of addiction that held that people had chosen to be addicts or that it was their diseased brains that made them into addicts were both insulting and wrong. I’ve been arguing that addiction is a relational problem, that no one is born that way and you have to harm the heart to create dependency.

And, for a lot of that time, it seemed like no one was even listening – and so few Calgary Counsellors were willing to stand up and say the same things.

Earlier this month, Johann Hari published a brilliant summary of the latest research in the field:

“A person who experienced any six or more of the categories” of childhood trauma, Dr Felitti tells me, “was 4600 percent more likely to become an IV [injecting] drug user later in life than a person who experienced none of them.” He adds: “I remember the epidemologists at the CDC told me those were numbers a magnitude of which they see once in a career. You read the latest cancer scare of the week in the newspaper and something causes an increase of 30 percent in breast or prostate cancer and everybody goes nuts – and here, we’re talking 4600 percent.”

The published research showed that for every category of trauma that happens to a child, they are two to four times more like to grow up to be an addict – and multiple traumas produced a massive risk. The correlation for addiction was startling. Nearly two-thirds of injecting drug use, they found, is the result of early childhood trauma.

But why would this be? Further research by the British psychoanalyst Dr Sue Gerhardt advances an explanation. When you were a baby, what happened when you were upset? If your mother soothed and reassured you, in time, you will have learned to soothe and reassure yourself. If, however, your mother responded to your pain by being hostile or angry or distressed – as chaotic addicts like Whitney Houston often do – you will not have learned to regulate your own feelings. You would then be much more likely to need to seek external soothing – and nothing stuns internal grief quite like chemicals, for a while.

Just as Dr Felitti’s obese patients tried to protect themselves from predatory sexual attention with layers of fat, his drug-addicted patients were often trying to protect themselves from the childhood storms in their own heads – by numbing themselves with chemicals. His obese patient didn’t feel so afraid of sexual assault if she had rendered herself conventionally ‘unattractive.’ His addicted patients didn’t feel their own agony so keenly if they were drugged.

And, Hari is only one of a growing list of distinguished and aggressive authors and thinkers who are finally standing up to the monolithic force of Control Model based assessments of addiction.

They are standing up and fighting back with ever more inescapable volumes of research, statistics and psychologically founded treatments for addiction. And, unlike Control Model Based programs, they can prove that these techniques actually work! Thankfully, a growing list of Calgary therapists are starting to listen. 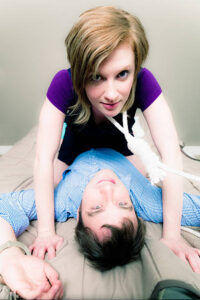 And, if you strip away all of the fluff, they are all basically saying the same thing: If you are looking for a Psychologist in Calgary to treat your addictive struggles with sexuality, then you are really looking for a combined PTSD/Trauma Therapy Skilled Sexologist, Calgary marriage Counselling and Psychologically founded Addictions Counselling in Calgary.
Calgary counselling services that claim to treat addictions but don’t, at a minimum, offer the above, are offering yesterday’s solutions – and we think you deserve better.

So, if you’re convinced you deserve nothing less than today’s most well researched and proven solutions, then perhaps it’s time to sit down with your partner and have that direct and earnest discussion about now being the right time to reach out for real help.

Sexology Calgary: Setup your first Couples Counselling Calgary session today and experience what a truly integrated approach can do for your relationship!